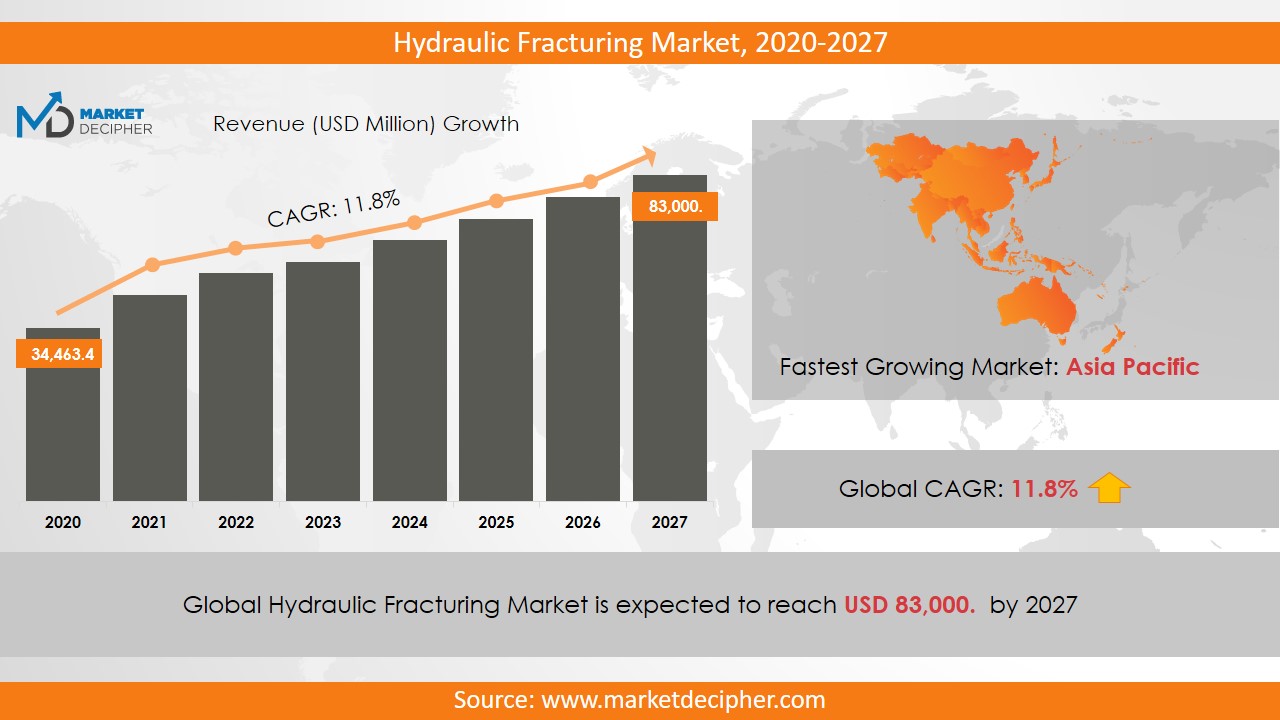 Hydrocarbon extraction from the non-generic reserves has seen a great rise because of the use of horizontal drilling in amalgamation with hydraulic fracturing methods. Displacement of trend line towards developing unconventional reservoirs of shale, tight gas, tight oil, and coal bed methane is anticipated to push hydraulic fracturing market growth over the upcoming years. Major players in oil and gas extraction worldwide have been witnessing a fall in extraction levels of conventional reserves, as they are depleting. Fall in petroleum production levels would widen the gap between demand and supply. Application of such advanced techniques of hydraulic fracturing has also helped organizations to increase the return in lower profitable regions, such as in the Arctic. The US and China have declared several incentives such as financial assistance, foreign direct investment, and tax reliefs in the hydraulic fracturing market, which will further enable business growth. Also, the major chunk of the future fracturing demand is expected to come from emerging economies.

The hydraulic technique is closely dependent on crude oil prices. Acquiring a source of water for fracturing with its waste emission is a big challenge. To counter environmental effects, industry participants have been developing new technologies which use lesser or no water at all. But, huge capital expenditure to counter the environmental impact may restrict the hydraulic fracturing market size growth. Strict regulatory measures and safety rules by regulatory bodies are also considered as a threat. Moratoriums or bans from regional and local bodies also pose as a major hindrance to industry participants.

To optimally nullify the effects of all the possible threats, opportunities such as rising natural gas demand from powerplants due to the provision of better fuel efficiency will lead to business growth over the upcoming years. As reported by IEA estimations, production of natural gas is expected to rise over the next years. Shale gas is calculated to be a key contributor to this growth. Hydraulic fracturing industry is anticipated to witness stable growth in tight gas and coal bed methane over the next few years.

The global hydraulic fracturing market is projected to grow at an annual growth rate of about 7.55% over the forecast period (2020-2025). North America (Canada and the U.S.) accounts for the largest share of the hydraulic fracturing market. Factors such as improved drilling activities, redevelopment of matured fields, and investment in new offshore projects are driving the growth of this market in North America. The European market is projected to record the greatest CAGR due to favorable government initiatives, increasing adoption of state-of-the-art well stimulation technologies, and the growing need to enhance production from already existing wells. Prominent players in the hydraulic fracturing market include Schlumberger Limited, Weatherford International, and Baker Hughes Incorporated.

Evolution Well Services (EWS), a United States-based drilling contractor, has announced an agreement of 2 years to deliver Hydraulic Fracturing and Servicing to the industry, in January 2020. The company informed that the implementation of this agreement will be in the first quarter of 2020.  “This agreement illustrates acknowledgment by yet another leading E&P company that our technology achieves both of these goals. Evolution continues to lead innovation in electric frac and has proven that our fleets are not only a viable solution but are the ideal solution.”, the technology and marketing Vice President at Evolution Well Services, Carrie Murtand, elaborated on account to this agreement. The solutions provided by the company for hydraulic fracturing are designed and packaged by EWSs affiliate company Dynamics Power Solutions DPS, the fastest growing firm in manufacturing power and control distribution boards.

The two rising companies in the hydraulic fracturing industry, Banner Midstream Corp. and Mount Tam Biotechnologies, have disclosed that their previously announced merger is being closed, in November 2019. “The completion of our merger marks a critical point in Banner’s evolution.”, the President and Principal Financial Officer (PFO) at Banner Corp., Jay Puchir informed on the account of the closing merger between the two multinational firms.