Introduction
The automotive driving recorder is a camera DVR recorder that is attached to the windscreen or the dashboard of a car with the help of a suction cup. It records all the events taking place on the road and inside the car. It is connected to a 12-volt power supply directly by the battery of the car.
The average price of a good automotive driving recorder is about US$ 200, although the expensive ones are even in the price range of US$ 400-600. The good recorder is the one which is small in size and gives a video recording of more than 4 days so it can be easily used on long trips. 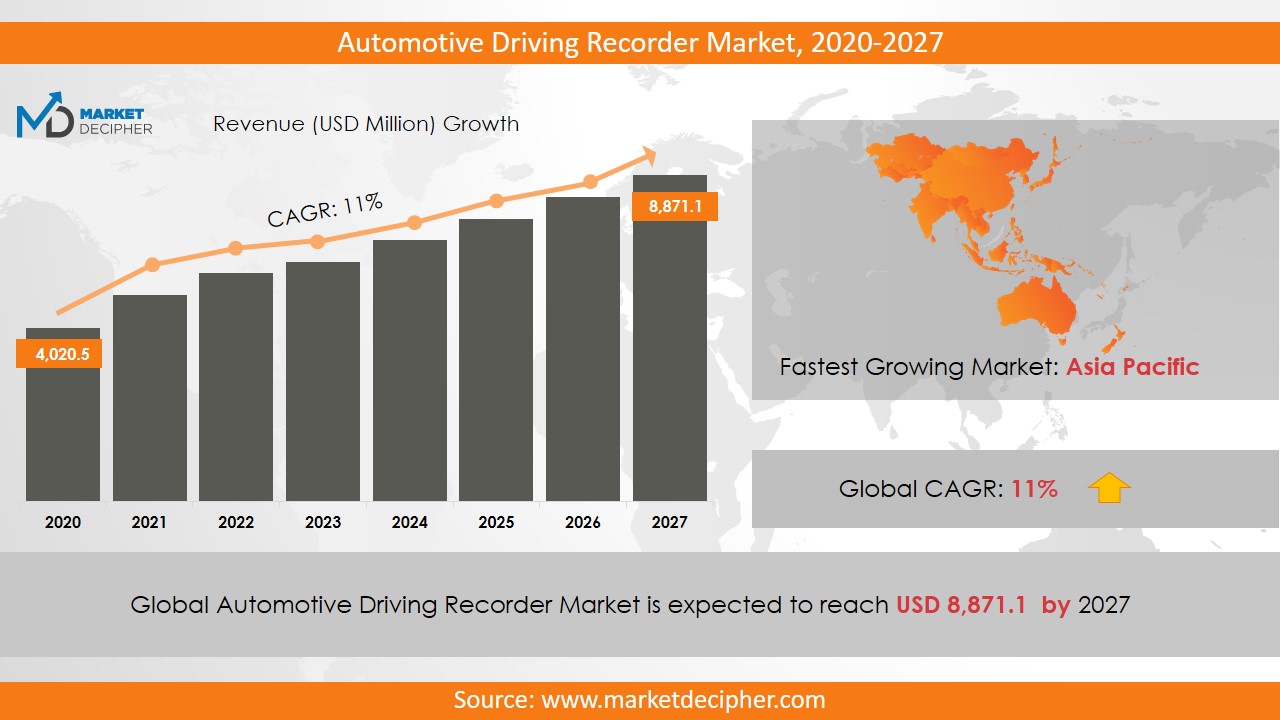 AutomotiveDriving Recorder Market is estimated to reach USD 7.2 Billion in 2025 and is currently growing at a CAGR of 11% during the forecasting period of 2018-2025.

The recorders are basically of two main types including the portable driving recorders and the integrated ones. The portable ones are not attached to the vehicle’s dashboard or windscreen but are free. The person sitting on the front seat holds them in the hands or they are settled on the dashboard in the angle where they record the most efficient video. On the other hand, the integrated ones are attached to the car by suction cup but perform the same function.
Analysis by Application
The application of the automotive driving recorder is basically in the recording of video, audio and capturing pictures in the car and on the road. Around 1.25 billion casualties are faced every year due to the traffic and street mishaps. Out of this huge number, 90% of the deaths are recorded in the low economy countries which although constitute 54% of the world’s vehicles. This greatly affects the developing countries because the deaths have a 3% effect on their GDP which is a great economic loss for a developing nation. This makes the use of automotive driving recorders more significant. Their main use is in the traffic monitoring but at the same time, these devices are being used efficiently as parking monitors, photography entertainment purposes and in lot more ways.

Automotive driving recorders used by drivers in vehicles to secure themselves against accidents are increasing in demand. Automotive driving recorders are functional in recording video information on removable capacity media, such as, SD cards, hard drive, and so forth, which are primarily used in assisting drivers for parking, in assessing vehicle performance, to enhance night vision, and in gathering critical evidence. Moreover, they are featured with advanced computer vision algorithms that are effective in extracting relevant data from the captured images for assisting drivers for various purposes, thus playing an important role in advanced driver assistance systems. The automotive driving recorder market is expected to rise at a rapid rate, as a result of increased sale of autos and innovation in sensors used in cameras. Further, increase in the frequency of fatalities on roads is certain to propel the market growth. Social outcome, for instance, the general population’s focus on street security and administrative norms pertaining to stringent street awareness are predicted to fuel the market development. Therefore, with an increase in the number of cars manufactured and consequent increase in traffic on road, leading to the construction of several highways for better connectivity of roads to control traffic, the importance of safety has taken top priority in the automobile sector where the use of automotive driving recorders finds increasing prominence. The market growth in this arena is thus accentuating at a momentous rate.

On the contrary, there is a high establishment cost of automotive driving recorders, which acts as a restraining factor and limits the market development. The anticipated increase in the installation of advanced driver assistance systems and laws mandating the same are most likely to facilitate useful opportunities for emerging and active players in the automotive drive recorder market on a worldwide basis in the long term.

Analysis by Region
Talking about the regional analysis of the market the biggest provider is Europe, which according to a report produced over 10 million products in 2017. The use is decidedly increased in Korea and India. APAC region is the biggest sales area for the market with a market share of about 40% and this includes majorly China and India. The use of these recorders is now increasing in Russia as well and it is observed that the use of automotive driving recorders is increased by 9% in Russia from 2017 to 2018. Then comes the US market which is also a big share-holder but after the APAC region.

The top 5 companies cover 40% of the market shares. These companies include Blackvue, Qihoo 360, Alladin group, Lucas Dashcam, and Phillips followed by DOD Tech, Nextbase UK and many more. The reason behind the companies to be the major provider is the efficient recorders with high quality and long backup time videos.