Disposable sterile acupuncture needles market size was estimated at USD _43.7 million in 2020 and is forecast to reach USD _87.9 million by 2027. 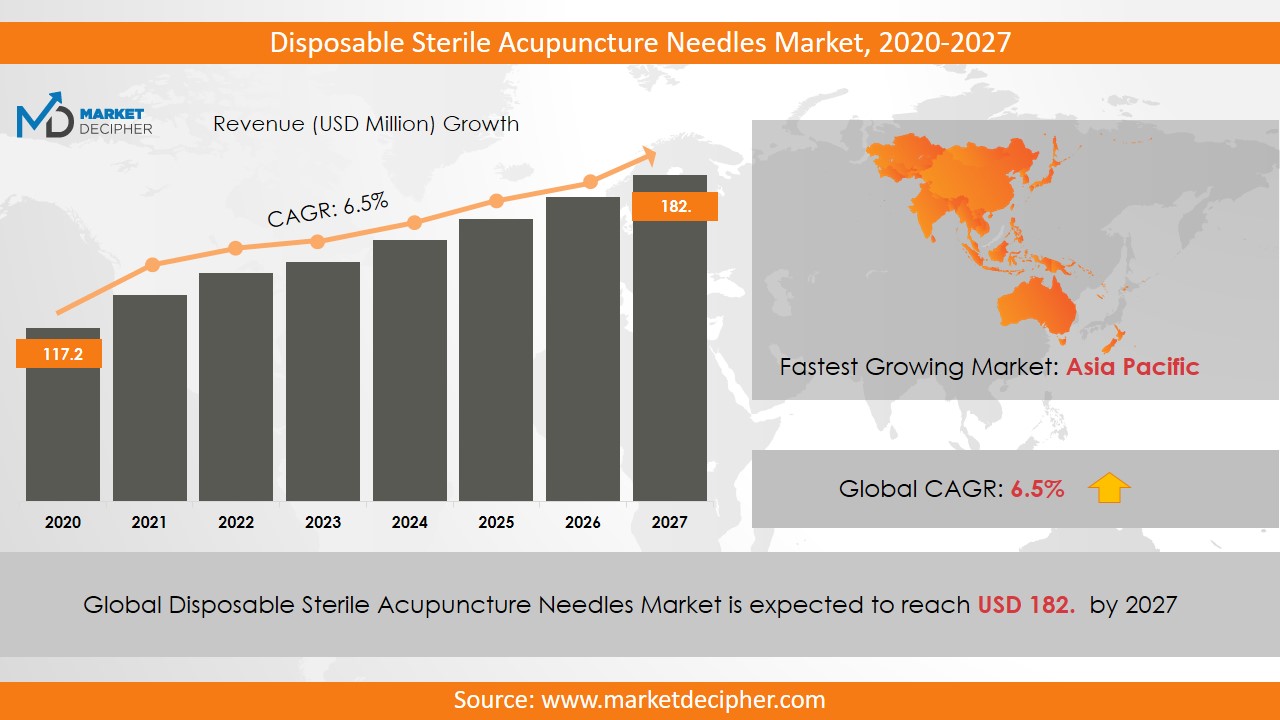 The major problem with this increase in demand is that suppliers are unable to meet this constant demand and are more prone to make mistakes or not test their products adequately in order to ship them out as fast as possible. This could become a huge health risk as if one of these needles is inadequate it could break inside a patient and rupture an organ or cause an infection.

With increasing incidence of orthopaedic problems owing to lifestyle modification, acupuncture is a growing trend in treating these problems. Besides, other chronic ailments or conditions such as headache, blood pressure, and whooping cough to mention a few are also treated with acupuncture. Introducing acupuncture among the choice of treatment modalities readily available to the public including physiotherapy has gained great attention as people all across the world are willing to explore options of treatment of diseases without the involvement of surgery. Since treatment by means of acupuncture means insertion of needles deep into the skin of the patient, there is a growing market for disposable sterile acupuncture needles. There is also adequate evidence, however, of the impact of acupuncture to expand its use into conventional medicine and to encourage advanced studies of its physiology and clinical value as per current standard medical practice. Promising results in relation to the efficiency of acupuncture in adult post-operative and chemotherapy nausea and vomiting and even in post-operative dental pain are showing increasing trends in demand for disposable sterile acupuncture needles. Acupuncture is now seen to useful as an adjunct treatment or an acceptable alternative even to be included in a comprehensive management programme. Findings from basic research have started elucidating the functionality of acupuncture, which includes the release of opioids and other peptides in the central nervous system and the periphery along with changes in neuroendocrine functions. Although a lot needs to be accomplished, the advent of plausible mechanisms for the therapeutic effects of acupuncture is highly encouraging, for which the disposable needles acupuncture needles market is expected to grow at an accelerated rate.

Challenges to this market would not involve direct impact due to demand, because it is more of procedural flaws that could lead to a fraction of unsuccessful treatment cases.