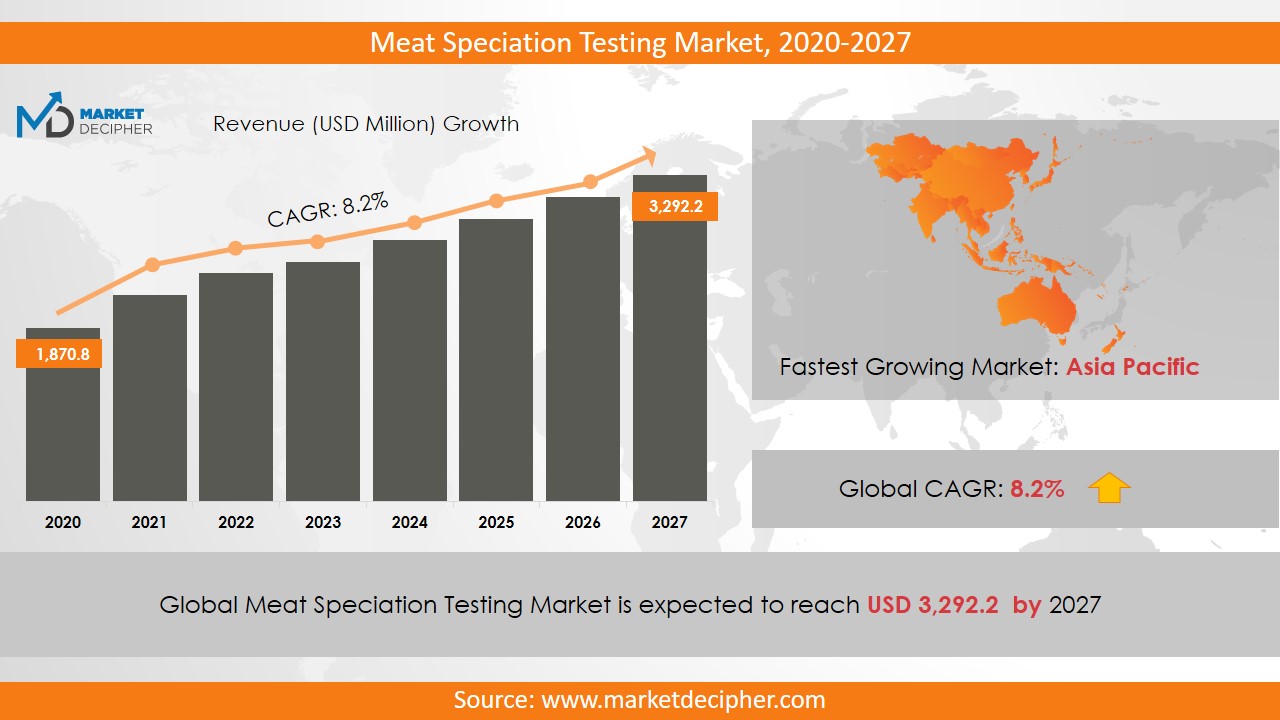 One of the core reasons why the increasing amount of meat consumers worldwide are have created a higher demand for meat speciation testing is the rising accounts of scandals caused due to the mislabeling of meat products. Majority of the food adulteration cases are categorized under meat and meat products. This pushes the demand for meat speciation testing as a measure to assure authenticity and reliability. When the meat is the processed too much, identification of the origin is hard paving way for adulteration and contamination. Hence, the market for meat speciation testing will grow immensely in the upcoming years.
The techniques introduced in detection are DNA based in order to detect the meat species and meat ingredients. There are ample species-specific testing methods that have been developed to identify meat types such as pork, turkey, beef, lamb and chicken. As per USDA in 2019, the worldwide pork production totals to about 1.1446 billion metric ton approximately. Processed and packaged meat are key drivers helping in increasing production. Also, the high-paced rise in the poultry market calls to boost demand. As the demand is rising, the consumers are also becoming more aware of the adulteration practices and are concerned about the health issues associated with the ultimate products. Hence, consumers have created huge demand for certified products. Also, religious beliefs among consumers require halal and kosher certifications. The implementation of the strict regulations, the incidence of diseases due to the consumption of meat carrying bird flu, high frequency of food adulteration are the key growth factors that are benefiting the market growth.
On the flip side, threats such as the poor progress of the technological advancements, especially in developing countries, limited regulations for food monitoring, and underdeveloped infrastructure restrict the expansion of the market. Though, the meat product manufacturers have raised funding in research and development, to abide by the regulatory requirements, which in turn could help nullify the effects of threats in future. Furthermore, the European region dominates the world market as per the latest reports, similar market share is expected to be garnered by most developed countries.

The global meat speciation testing market is classified as species, technology, form and by region. Further, the various forms of meat available in the market are raw, processed, and cooked. The market of raw meat speciation is increasing significantly in terms of volume and value. Based on technology, enzyme-linked immunosorbent assay (ELISA) technique, molecular diagnostic technique, and polymerase chain reaction (PCR) technique are the major segments. However, PCR and ELIS techniques are augmenting the meat speciation testing market highly as compare to the other one. The reason behind registering a great market revenue by PCR technique is its ability to determine species even at 0.1%. In addition, based on species, the market is classified into chicken, swine, cow, horse, sheep, and others. However, the chicken meat adulteration has been a significant factor in fueling up the markets growth. Many chicken meat adulteration cases have been detected around the world in last few years. Due to the hiking prices of chicken, many manufacturers are being engaged in adulteration of chicken with pork or its contaminated species which in turn is anticipated to augment the markets growth in the forecast period. After, the recovery of the economic crisis occurred in the market due to the terrible effects of pandemic, the swine segment will be able to drive a CAGR of 6.3% in the next 6-year period. The cow segment is expected to generate a revenue of $681.5 million by the end of the forecast period.

Geographically, the meat speciation testing market has been segmented in North America, Eastern Europe, Western Europe, Japan, Latin America, and the Middle East & Africa. However, North America has been registering the highest market revenue over the last few years due to the highest demand for packaged food in this region. Furthermore, Asia-Pacific region is increasing the influence of market. However, the scenario is different in Japan. The European region registered the highest revenue in 2016. Also, this region is expected to expand dominantly in the next 6 years due to increasing cases of food adulteration.

The leading companies operating in meat speciation testing market are VWR International, Geneius Laboratories Ltd., Scientific Analysis Laboratories, ALS Limited, Eurofins, Genetic ID NA, Inc., AB Sciex LLC, LGC Science and Neogen. The major factor which hampers the market growth is the lack of technology, organization, and sophistication in the food system testing. However, the top leading industry players have managed to lead the market through their advanced service portfolios for specific segments. These companies are trying to maintain the authenticity of meat by developing the innovative technologies. In June 2015, Europe has introduced a DNA chip technology method which had the capacity of identification and detection of 21 animal species in food products. The new services launched by the industry players accounted for the significant increase in overall development and expansion of the market. Further, VWR international is one of the prominent companies in this industry.