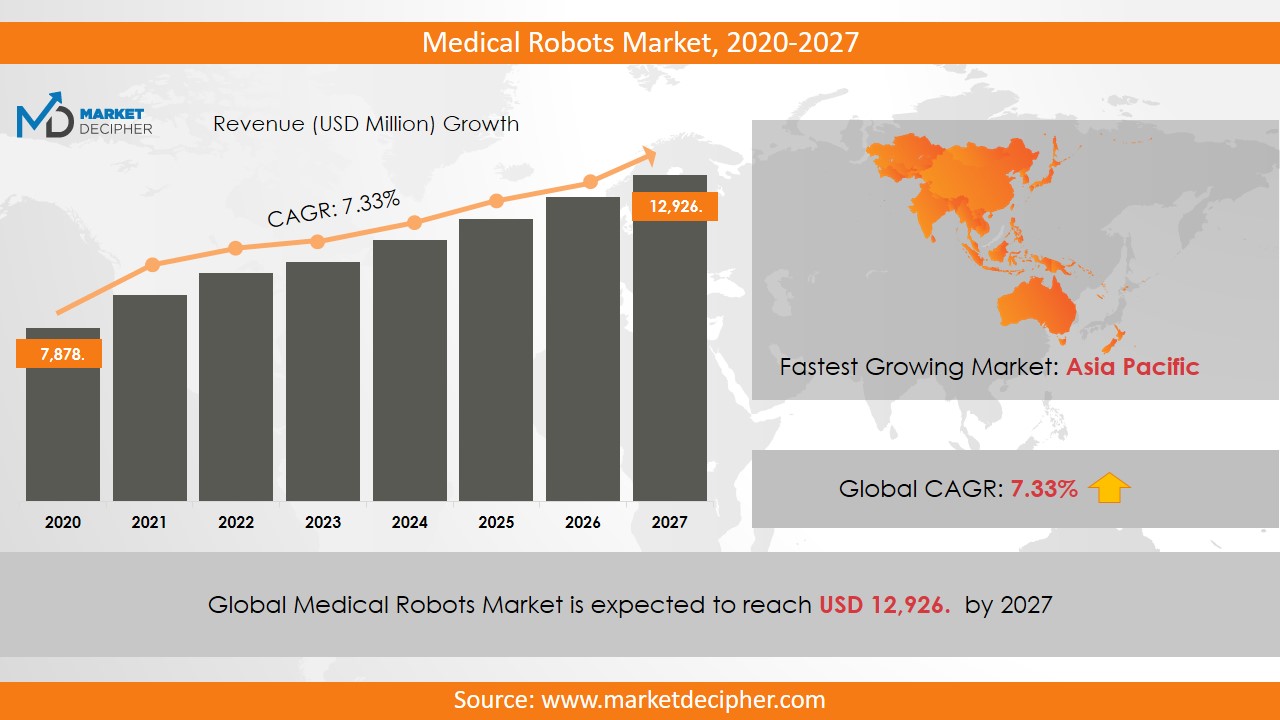 The worldwide market for medical robots is highlighting because of the increasing demand for minimally invasive surgeries and human errorless surgeries. Cost-effective healthcare is also a selling point of medical robots industry. Surgical robots reduce the pre and post-operative cost and duration of admission in hospitals, reduce the complication rate of surgeries and improves the accuracy of the procedure. Further, the innovation of nano robots, rehabilitation robots, hospital and pharmacy robots is opening up varied usage markets for the product idea.

Key drivers for the rise of medical robots market are higher elderly population, increasing incidence of neurological disorder, rise in cases orthopaedic conditions, demand for telemedicine, technological advancement in the automation of, and increased demand for reduction in medication errors, more expendable healthcare spending as well as funding big industry players. Also adding fuel to the increasing market are a larger pool of patients, increasing medical tourism, and improving healthcare infrastructure initiatives by the government. Furthermore, the medical robots market is also on a rise because of greater awareness of patients about the benefits of the product.

The emergence of artificial intelligence (AI) has proved to be boon for medical robots. AI has created various opportunities for improvement in minimally invasive surgeries and has led to more efficiency due to operational stability. The innovation of high precision devices in medical robots is fueling the worldwide product market as they assure ease of operation in significantly sensitive procedures requiring high stability and even a split minute’s error may harm surrounding cells. Complications in other neighbouring tissues may cause damage and internal as well as external bleeding. Medical robots market has further growth prospects from applications in surgeries, diagnosis, and other procedures as they are gaining trust among healthcare professionals.

On the flip side, high initial capital and lack of skilled labourers are key threats that could possibly restrain the growth of the medical robots market. To counteract, the onset of COVID-19 has led to a wave of protocols involving social distancing and minimal human contact. Hence, the pandemic carves-out newer opportunities for the product market for years to come.

Increasing awareness on benefits associated with minimally invasive surgeries is increasing the demand for robotic surgeries. The effectiveness of robotic-assisted gait therapy (RAGT) on rehabilitation of stroke patients has seen an increase in demand for rehabilitation robots. This increasing need for better healthcare will see the global robots market hit $12.7 billion by 2025. Asia-Pacific is expected to show the highest growth in the coming 5 years. Emerging countries such as Brazil, China, India, South Africa and Russia are expected to grow exponentially in the coming years following an increase in medical tourism. Major players in the industry include Stryker Corporation, Intuitive Surgical, BD Rowa, Omnicell Inc., Hocoma AG and ARxIUM.

BIONIK, am international manufacturer of medical technologies, has announced its new technology ‘In-Motion Connect’ on 25 June 2020. The company has also proudly announced its partnership with Kindred Hospital Rehabilitation Services to develop and commercialize the newly introduced technology. In-Motion Connect is a cloud-based data analytics solution that connects with all In-Motion Robots to safely collect data from the robots. CMR, a medical solutions provider, has launched a new med-tech robot ‘Dubbed Versius’ in October 2019. The surgical robot is said to attract many large deals for the company from European trade giants. The company says that its business will be expanding towards United Kingdoms, Europe, Asia and eventually United States. Johnson & Johnson Co., a medical equipment and solutions provider, has announced in January, that it is developing new medical technologies that will help the surgeries of the future. The company says the surgeries performed will be totally automated by surgical robots they are developing. The launch of their new and innovative tech is scheduled in May 2020. This new technology is said to be developed by the collaboration of Johnson & Johnson with Medtronics Inc. and several other technology solutions providers.