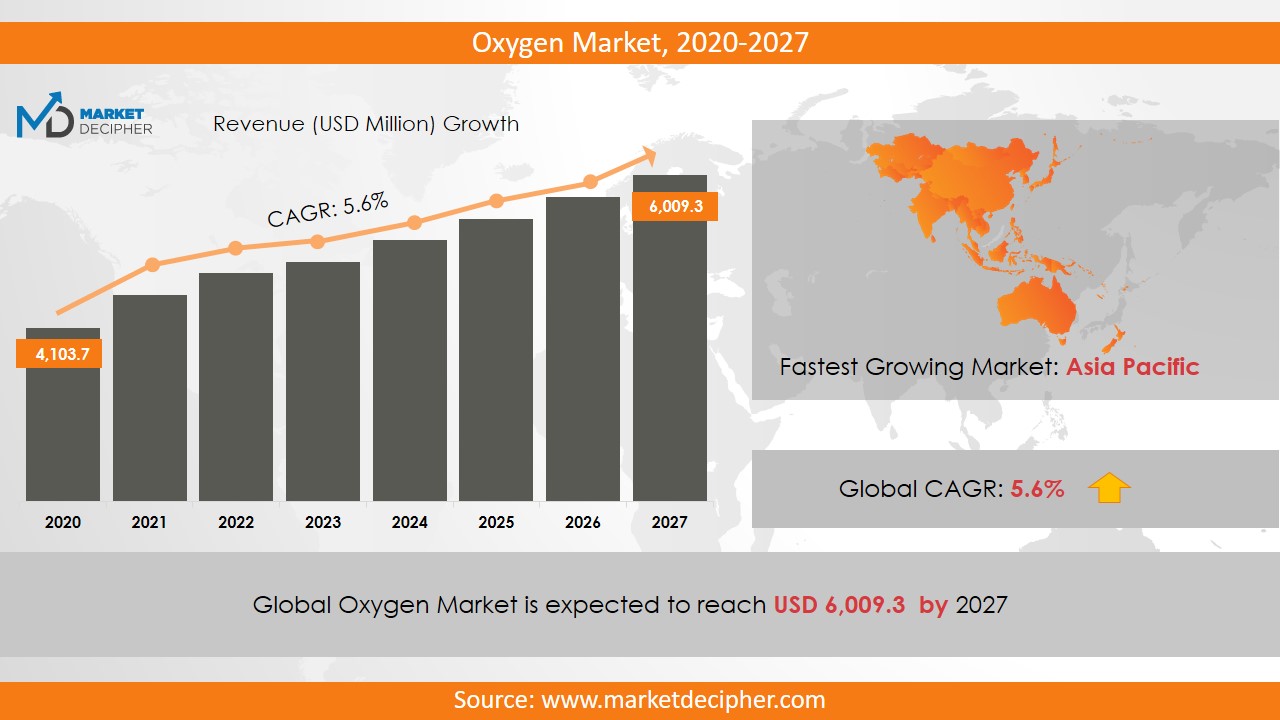 The major reason for the oxygen market growth is its extensive usage in various industries such as agriculture, automobiles, beverages, chemicals, construction equipment, food, glass, medicine, steel, which require stable oxygen for processes. The various uses of oxygen in the chemical industry as an oxidizing agent and catalyst is a key factor in the growth of the oxygen market. Oxygen is used in the mineral and the mining industry to ensure high efficiency in the process which helps to reduce the overall operational cost. It is used as a breathing apparatus comprehensively because of the increasing pollution that contaminates and reducing the oxygen content in the air. It also helps in the carbon activation process and due to the multi-purpose usage of oxygen in almost every sector, there is a surge in the market demand and growth.

Different industries use oxygen as a substitution for air to improve the overall efficiency in the manufacturing of a product. Liquid oxygen is mostly used as a propellant in spacecraft and rockets and an increase in the developments in the aerospace industry has catapulted the increase in the market demand. It is mainly used as a breathing aid and an apparatus in the medical sector and also used to cure frostbites and increasing advancements in the medical sector have boosted the increase in the oxygen market revenue. There is an increase in the demand in the use of oxygen in the water plants to remove the pollutants from the water effectively thus contributing to its increased market demand.

A few limitations to the oxygen market growth are its substantially high production cost and an increase in severe accidents in case of mishandling the oxygen apparatus.

The global oxygen market is estimated to grow at a CAGR of 11%: from $37.93 billion in 2019 to $59.17 billion in 2023. The Asia Pacific region (countries Industries, Japan, China, New Zealand, and Australia contributing the major part to the Asia Pacific market) accounts for the world largest oxygen market due to the growth in healthcare and manufacturing units. European countries, North America, and Canada are overgrowing due to scientific applications and increased demands in various sectors: agricultural chemicals, food, construction equipment, glass, shipbuilding, explorations, medicine and steel manufacture. Brazil, Mexico, and Argentina of Latin America and African countries account for a fair share. Companies like Yingde Gases, Taiyo Nippon Sanso, Praxair Technology Inc. are contributing a maximum proportion to the market.