An oxygenator is essentially medical equipment which is used for exchanging oxygen and carbon dioxide in the blood of patient during procedures which involve surgeries or any process that may cause interruption or cessation of the blood flow in the body, a critical organ or great blood vessel. These organs can be the heart, lungs, or liver or the vessels. 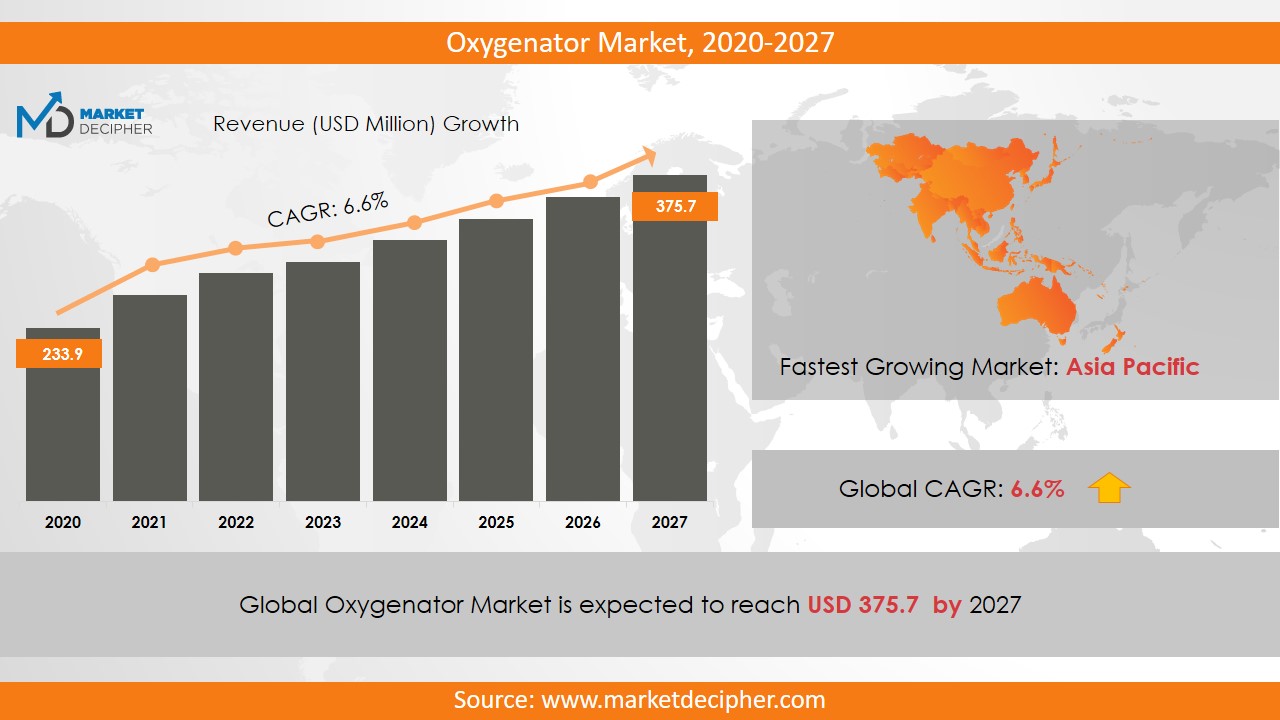 Oxygenator market size was estimated at USD _43.7 million in 2022 and is forecast to reach USD _87.9 million by 2031, growing at a CAGR of _9.6%.
It is mostly used by medical personnel, in clinical settings or in intensive care units in hospitals is one of the basic necessities in hospitals and requires special skills. The rush in the global aging population which is the senior population and rise in orthopedic and cardiovascular diseases and illnesses are the crucial and indispensable factors that augment the growth of the oxygenator market. With the onset of the COVID 19, breathlessness has become a common problem amongst the patients, which is also expected to increase the demand for the oxygenators. Additionally, the increase in surgical interventions and betterment in healthcare settings which drive the forces of the market. But another flip side of the coin is the disadvantage of direct contact between the blood and air which is predicted to disrupt the market growth of the oxygenators.

Oxygenators form a necessary category of medical devices in a medical environment, and their ability to exchange oxygen and carbon dioxide while the patient undergoes a surgical procedure if the procedure necessitates termination or suspension of blood flow to a vital organ or blood vessel in the body leads to generation of high demand in the medical segment, fostering rapid market growth. Increasing prevalence of cardiovascular diseases and altering lifestyles on a global scale are key factors in propelling the market as there is an increasing awareness regarding health and well-being along with increased adoption of surgical intervention in case of cardiac issues. This is further expected to accelerate market growth. The functionality of oxygenators to perform as a substitute for lungs during a surgical procedure, to expose the blood to oxygen and eliminate carbon dioxide, is a demand-generating factor. The enhanced oxygenators are designed such that they maximize the level of oxygen, carbon dioxide, and other gases capable of being transferred at a given blood flow rate to make gas transport and its regulation convenient during surgery. The global oxygenators market can be segmented into bubble oxygenators and membrane oxygenators, where the latter is anticipated to occupy a dominant market share in the future as they cause less blood trauma, less haemolysis, and less post-operative bleeding. The market can be divided into respiratory, cardiac, and extracorporeal cardiopulmonary resuscitation, of which the respiratory segment is most likely to hold a major market share in the future because of increasing prevalence of chronic obstructive pulmonary disease of the lungs and increase in cardio-pulmonary diseases. Favourable reimbursement policies along with advanced hospital infrastructure will bolster the market growth.