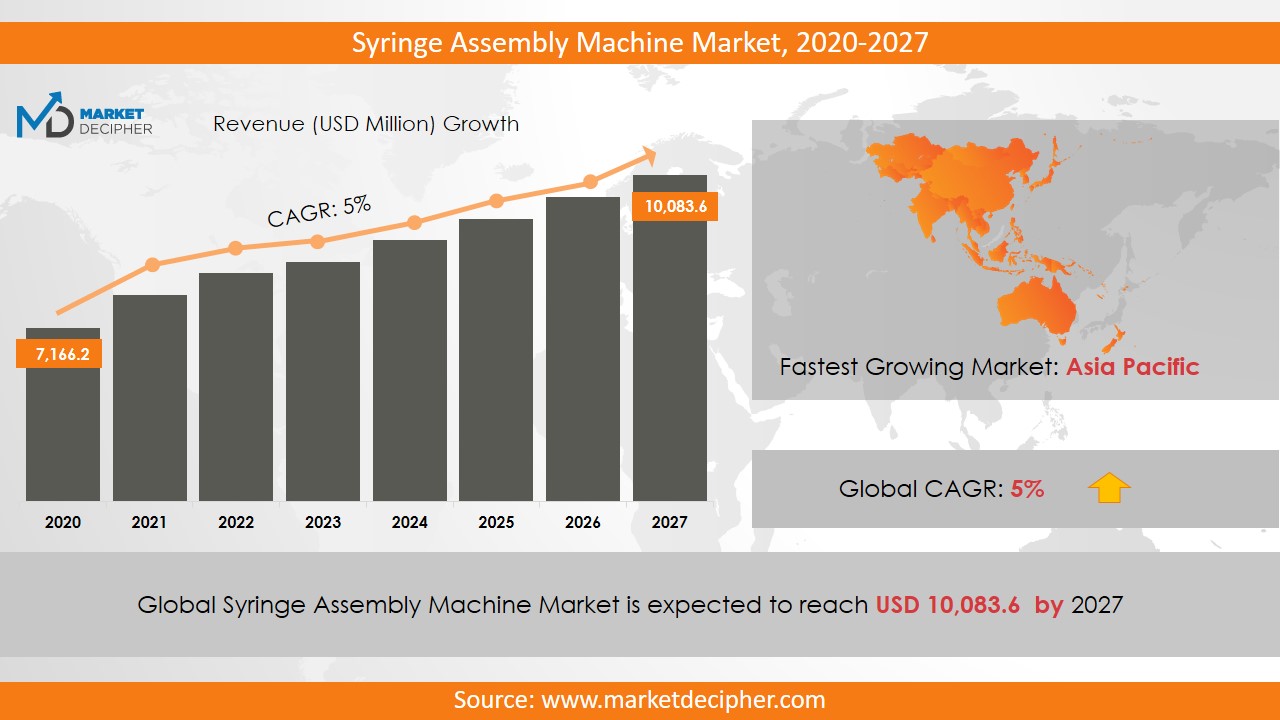 Syringe Assembly Machine is an advanced drug delivery device filled with a single measured dose of high-end injectable drugs. The reason for its ever-increasing demand is its advanced and convenient injectable mode that reduces high infection risks that often come with reusable syringes and increasing inclination towards self-administration (like insulin) among the aging population. It is also much more convenient for healthcare providers and patients as it eases the operation process, reduces the risk of contamination, and gives accurate dosage measures.

Also in the wake of the COVID-19 outbreak, the demand for syringe has increased all the more as more and more patients are being administered with various drugs and medications. Also recently WHO has launched a policy on injection safety and the use of safer injections and equipment. The new WHO injection safety guidelines and policy provides detailed recommendations highlighting the value of safety, including devices for syringes that protect health workers from consequent exposure to infection.

The syringes are basically of two types- glass and plastic. The glass syringe is expected to rule the market. They are more resistive and reduce the risk of syringe material reacting with the fluid. These syringes can be reused after sterilization.

Other market driving factors and opportunities that would contribute to the growth of the global syringe assembly market include increasing number of blood-borne diseases and increasing awareness regarding benefits of prefilled syringes and the presence of a large number of biopharmaceuticals under clinical development targeted for parental administration. Additional factors include high growth rate economies of various developing and developed nations like India, China, Mexico, Russia, etc. that are attracting manufacturers to invest in their lucrative market.

Still, there are quite a few restraints surrounding the syringe assembly machine market. Some of them include disposal issues, use of traditional syringes, and other alternatives to these needleless syringes.

Automated syringe assembly machines are effective in transforming factory floors by enhancing quality, efficiency, and productivity, hence reducing cycle time and labour cost, thus bolstering their demand. The increasing demand owing to growing prevalence of chronic diseases and increase in demand for prefilled syringes for the syringes fuel the market for syringe assembly machines. Rising adoption of injectable drugs adds to their demand. The rise in the geriatric population and vaccination programmes lead to a subsequent increase in the demand for syringes, in turn fuelling the growth of syringe assembly machine market. Their operational repeatability, minimal installation space, ease of use, high capacity and flexibility to process all types of sizes surge the demand for these machines. They are also customizable, accompanied with the choice of optional units, such as loading and unloading systems, vision systems, and so forth.

Syringe assembly machines provide quality and therefore minimize defective product rates, thus ensuring their high demand. Equipped with gears, they experience a bit of backlash between the axels during power transmission, and their optimum production capacity is about 18,000-25,000 units per hour, thus functioning along high efficiency levels.

Its ability to handle different operations, including some angular orientations and fluid dispensing system, further accelerates demand for syringe assembly machines, bolstering the market. Increasing adoption of assembly units for developing medical devices, such as syringes, inhalers, catheters, and disposables, will drive market demand. The use of plastics over metal, aluminium, and bronze also maximizes equipment efficiency as plastics are featured by a wide range of properties such as lightweight, low friction, noise abatement, self-lubricating, chemical and corrosion resistance, better wear properties, and high strength, decreasing the downtime and consequently increasing production efficiency.

Threat of new entrants and threat of substitutes are assumed limitations to the growth of the syringe assembly machine market.