Adventure Touring Motorcycle Market size is estimated to be $xx million in 2020 and expected to grow at a CAGR of 10.08% during the forecast period of 2020-2027. 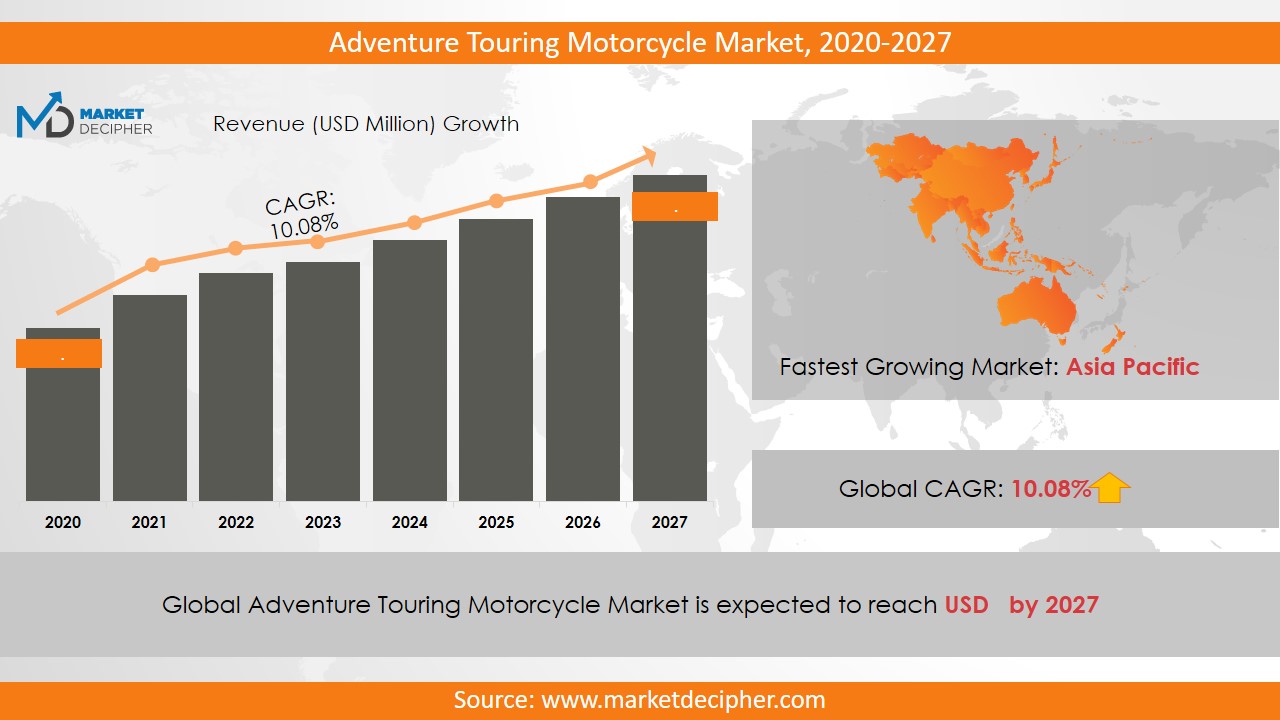 Introduction
Adventure touring motorcycles are motorbikes with strong body supporting long route traveling both on-road and off-road with good riding on asphalt. The latest trend gaining popularity in this market is the increase in usage of active suspension systems.
A good adventure bike has a supportive body with a fuel tank allowing the ride of almost 200 miles before the next refueling. These bikes are expensive with an average worth US $20000 with adding the US $3000 for clothes and gear, which is difficult for young riders to afford. The age groups which are likely to use such bikes are mostly between 50-54 years followed by 55-59 years and 45-49 years. The demand has decreased annually in the US after 2017 due to the increasing market of lightweight motorcycles.
Types of Bikes
By type, the segmentation is 500CC, 1000CC and above 1000CC bikes. The 500CC category has the best production by Honda and Kawasaki followed by Ducati Motor Holding. The 1000CC and above 1000CC bikes are well made by BMW and Honda companies followed by Yamaha bikes. These types are categorized based journeys and traveling. The on-road traveling is good with 500CC bikes but for off-road traveling, 1000CC and above 1000CC bikes are recommended.

Analysis by Application
Based on the application, the major segments are on-road and off-road. The off-road traveling needs a highly supportive body and heavy-duty shock absorbers which can withstand the jerks and jolts of unpaved ways. The requirement is the type of body that bears a very hard environment and still makes the ride easy for the rider. On-road traveling is much easier to drive and requires less harsh requirements. On-road riders are satisfied with the less efficient shock absorbers as compared to the off-road riders because they have to ride on comparatively smooth and paved roads.
Analysis by Region
Taking an eagles eye on the regional analysis, the biggest market share is owned by APAC i.e the Asia-Pacific countries which have a leading market with over 50% of the market share. This is followed by the European market which comes after APAC because the use of motorcycles in Asia and neighboring countries is very high. The third market share is owned by the market of North America which is dependent on the use of bikes for recreational purposes. The rest of the world is on fourth as per calculations and data given by International surveys.

Analysis by Companies
The largest motorbikes company is Honda Motor Company being the biggest supplier. Most of the reports give BMW group the highest rank in adventuring bike companies but in 2020 the Honda Motor Company took the lead. Which is followed by KTM, Yamaha and other various companies. The reason behind the biggest suppliers is the best quality and most luxurious bikes manufactured by those companies. Manufacturers such as Suzuki, Yamaha and KTM have started to manufacture off-road type of motorcycles with semi-active suspension system.

Market Growth
The growth of this market is due to the emerging trend and popularity of off-road touring. This is a key factor in which the growth of this market depends because the use of these bikes is basically in long-distance off-road traveling for which these bikes are best equipped. On the other hand, the major factor causing resistance in the market growth is the uprising market of commuter bikes. The original equipment manufacturers (OEMs) hesitate to enter the emerging countries because the commuter bikes give a tough competition to the adventure touring bikes.

The price range of adventure touring motorcycles is quite high, and therefore affordability becomes a question as they would cater to a particular section of the income group. Excessive utilization of these motorcycles has an unfavourable impact on fuel economy. As these motorcycles are often used on rugged terrain, tyres and chains need frequent replacement, and insurance costs are quite high. However, with growing income among the youth, the market growth is expected to accentuate.

Need report on this market for specific Region or Country? OR Need a customized report as per your need? Want to know discounts available?

Or Fill the below "Sample Request Form" with your queries in message box.